The perilous state of the earth’s natural environment is daily news and it would seem we are approaching a point of no return with rising global temperatures, wildlife habitat destruction on an industrial scale and plastic clogging our vast oceans and tiniest cellular organisms.

It is often argued that technology is part of the problem but could it also be part of the solution?

But how do they inform and persuade governments, institutions and individuals to make real and rapid changes? How do they deploy resources to best effect and in a way that gets to the heart of the issues?

These are just a few of the questions that conservationists are grappling with but now, thanks to technology, the answers may be closer than ever.

Affordable technology has been developed which enables data to be captured in real time and at scale, providing the vital intelligence and evidence needed to make a strong case for change. This technology provides answers to questions, such as:

The Role of Wireless Sensor Networks and the Internet of Things

Real time data is collected through “Wireless Sensor Networks” (WSN) and enhanced by greater connectivity to the “Internet of Things” (IoT).

A WSN is exactly what it sounds like, an array of sensors that have the ability to communicate their data wirelessly to another device. To look at this in more detail let’s start with an array of sensors placed at strategic points within the environment. 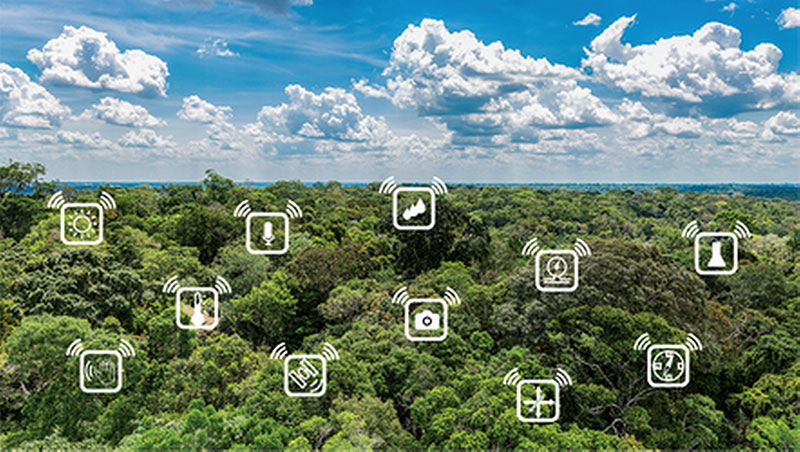 There are many sensors that can be used for many different things; this table outlines some of the more common ones:

With the addition of a wireless capability (and a battery or other localised power source) all these sensors can be deployed without cabling (for example, by attaching it to an animal without affecting its behaviour) and the data can be communicated away from the sensor.

The choice of wireless system is highly dependent on the application and there are many options from which to choose. In the first instance, a local wireless connection may suffice in which the sensors can pass data among themselves or to a smart device such as a mobile phone, tablet or laptop. Wireless technologies such as Bluetooth or WiFi are well suited to this and are standard in almost all such devices. This would allow a researcher to collate data or receive alerts from nearby sensors in real time and with minimal costs.

While WiFi and Bluetooth have great utility, their operating range is limited from a few metres to a few tens of metres. To really exploit the power of a WSN, the connectivity needs to be extended to the rest of the world so that data can be stored, accessed, shared and acted on. To do this requires infrastructure of some sort to provide (typically) a longer range wireless link and ultimately a connection to the internet. This connectivity of many devices to the internet and to other connected devices is referred to as the Internet of Things, or IoT. Data storage and processing forms part of the IoT often through the use of vast dedicated servers connected to the internet. These resources can be rented by users as a cost effective way to securely store and share data outside of their organisation and have it readily accessible from anywhere in the world over the internet. The storage and processing services connected to the internet in this way are referred to as ‘Cloud Services’ or simply just the Cloud.

The use of wireless infrastructure (we can refer to this as the ‘Network’) gives us the easiest access to the Cloud from our WSNs. There are many different types available that offer different levels of signal coverage and performance depending on the technology used. A familiar type of wireless infrastructure is of course the cellular network, common around the world. The cellular network is a good example of a terrestrial network that offers excellent coverage in populated areas around the world, though can be absent in extremely remote places and non-existent at sea. Data rates are good, allowing large amounts of data (such as images or videos) to be sent quickly and reliably to the Cloud. For truly global coverage, satellite infrastructure can provide internet access to the Cloud from anywhere on land or the surface of the sea, so long as a good view of the sky can be achieved. The downside with satellite communications though are that the data rates tend to be quite low, therefore being best suited to transmitting small amounts of data such as an alert, a temperature measurement or a GPS location.

We can see that the network is the real enabler of IoT but the choice of wireless technology is crucial to its performance. Anyone wishing to deploy an IoT enabled WSN will need to carefully balance a number of commercial, functional and technical aspects in choosing the right wireless technology to ensure their network is viable.

Four key metrics related to the wireless technology are as follows:

It should come as no surprise that the metrics highlighted above all trade off against each other; if you want longer range, you usually get lower data rates. If you want higher data rates or greater coverage your costs usually get higher.

For truly global coverage, albeit typically with low data rates, a satellite based system would be desirable such as Iridium and ARGOS (with newcomers such as Lacuna Space, Hiber, ICARUS and others emerging on the scene). With coverage constrained to land and with notable gaps in remote or rural areas, systems such as cellular (GSM/UMTS/LTE/5G), Sigfox, LoRa, LoRaWAN, ‘sub-GHz’ and many others can be utilised offering considerable flexibility.

To summarise the relative capabilities of some of these technologies, the following chart aims to visualise maximum data rate versus maximum connection range. 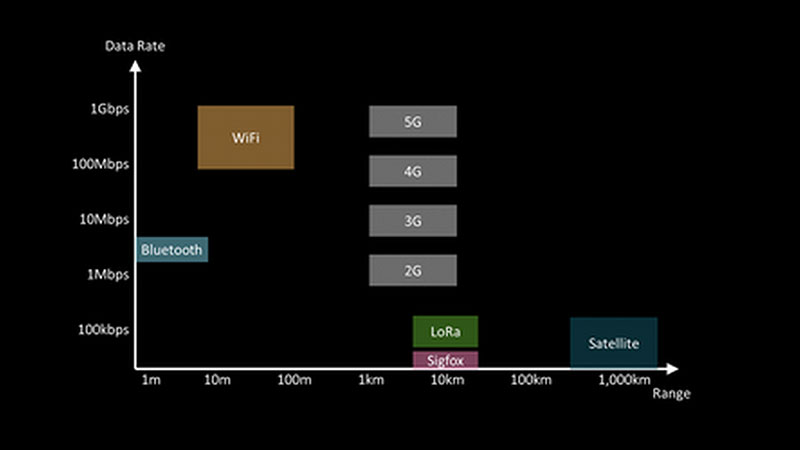 In a large IoT network, it is not necessary to take a one-size fits all approach; it is entirely possible to use different networks to connect your devices to the Cloud on a case by case basis. Devices can ‘mesh’ together where one device may pass its data to another device that has a connection to the network; some devices may connect directly to a satellite network and some may connect directly to a terrestrial network. 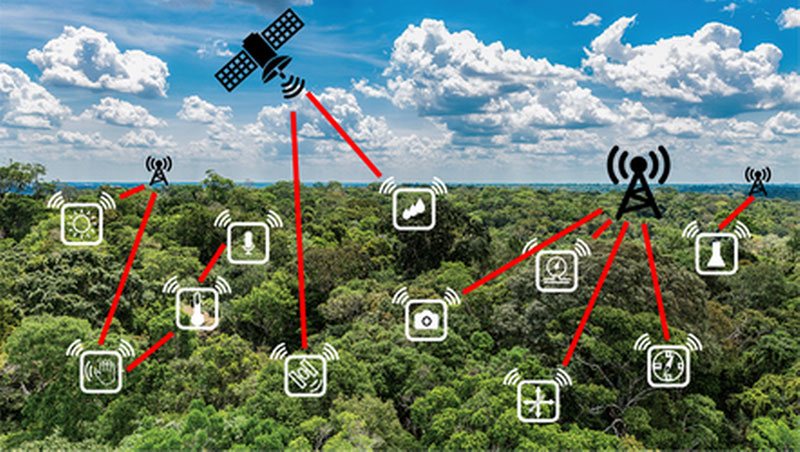 Once the data is in the Cloud it doesn’t matter how it got there, it becomes a global resource on the internet.

Data sets feed in to:

It can therefore be seen that the mass collection of data from WSNs around the world, even if focussed on a narrow area of study, can feed up in to a global resource of information that can be acted upon in the moment or fed in to bodies that have the power to act and legislate on this information and flow down the responses that are required to save the planet.

This website uses cookies to improve your experience while you navigate through the website. Out of these, the cookies that are categorized as necessary are stored on your browser as they are essential for the working of basic functionalities of the website. We also use third-party cookies that help us analyze and understand how you use this website. These cookies will be stored in your browser only with your consent. You also have the option to opt-out of these cookies. But opting out of some of these cookies may affect your browsing experience.
Necessary Always Enabled
Necessary cookies are absolutely essential for the website to function properly. This category only includes cookies that ensures basic functionalities and security features of the website. These cookies do not store any personal information.
Non-necessary
Any cookies that may not be particularly necessary for the website to function and is used specifically to collect user personal data via analytics, ads, other embedded contents are termed as non-necessary cookies. It is mandatory to procure user consent prior to running these cookies on your website.
SAVE & ACCEPT